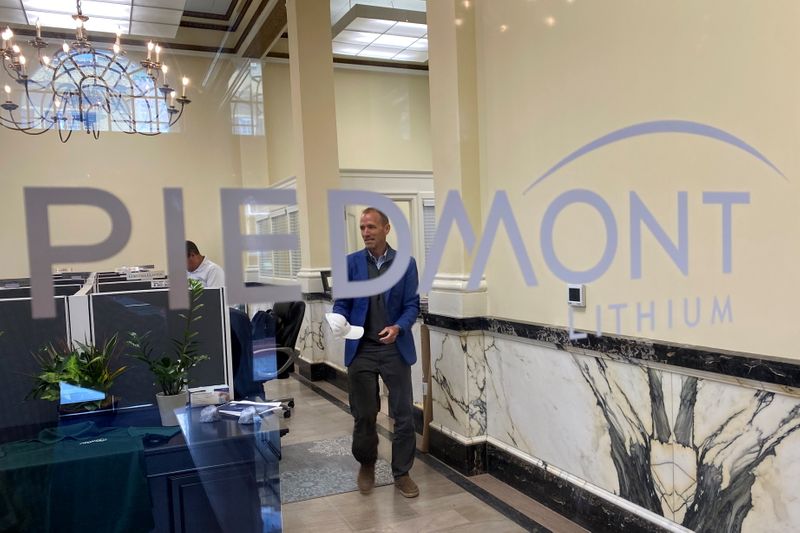 GASTON COUNTY, N.C. (Reuters) -In its quest to build one of the largest lithium mines in the United States, Piedmont Lithium Inc has overlooked one crucial constituency: its North Carolina neighbors.

Piedmont has also hired investment banks to find investors for its $840 million project, which would include an open-air pit more than 500 feet (152 m) deep and facilities to produce lithium-based electric vehicle (EV) battery chemicals.

The company, however, has not applied for a state mining permit or a necessary zoning variance in Gaston County, just west of Charlotte, despite telling investors since 2018 that it was on the verge of doing so.

Five of the seven members of the county’s board of commissioners, who control zoning changes, say they may block or delay the project because Piedmont has not told them what levels of dust, noise and vibrations will occur, nor how water and air quality would be affected.

Shares of the company fell as much as 21% on Tuesday after the Reuters story.

“Piedmont has sort of put the proverbial cart before the horse,” said Tom Keigher, chair of the board of commissioners. “Why in the world would they make this deal with Tesla before they even have approval for the mine?”

Piedmont said it waited to approach officials in order to refine its plans – it published a third iteration last month – and to secure a customer to show that the mine could stay open for its projected 20-year lifespan.

“We finally have a project to debut and really talk about,” said Keith Phillips, Piedmont’s chief executive officer.

“Maybe it would have been better had (commissioners) been in the loop constantly. We didn’t really have the time or resources to do it and we didn’t even know what to tell them, until now.”

The deteriorating relationship between Piedmont and county leaders reflects broader tension in the United States as resistance to living near a mine clashes with the potential of EVs to mitigate climate change.

Piedmont has already spent $58 million on the project, which would produce about 30,000 tonnes of lithium annually, enough to make about 3 million EVs.

The company originally planned to put its chemical plant in a neighboring county, but now intends to build it near the mine, a step that should reduce truck traffic. Piedmont also plans to crush rock in the mine pit, alleviating dust, and incorporate solar power.

In September 2018, Piedmont told investors it expected to obtain permits by the end of 2019. In August 2019, executives said they would apply for permits and rezoning “in the coming months.”

Piedmont said both times it was “not aware” of any reason why the county would not approve zoning changes, even though it had yet to present any information to commissioners. In December, Piedmont said it expected to receive local zoning approval before the end of June.

The company said the delays were due in part to weak lithium prices in recent years.

Piedmont had been set to meet with commissioners in March, but canceled with three days’ notice, further straining the relationship. Piedmont said it canceled that meeting in order to further refine its plans.

“This has been the worst rollout of a project from a company I’ve ever seen,” said Chad Brown, a commissioner who opposes the mine.

Phillips, Piedmont’s CEO, gave the company’s first presentation on the proposed project to commissioners on Tuesday night, though no vote was held.

“We haven’t done a good job – and I blame myself – engaging with the community,” Phillips said at the nearly three-hour-long meeting, which was webcast. One commissioner told Phillips it likely will be easier for the company to raise the necessary $840 million for the project than it will be to secure community support.

Phillips said Piedmont expects to apply for a state mining permit this summer, begin construction in April 2022 and be in production by the second half of 2023.

Eighteen county residents told the board they opposed the project. One spoke for it.

Piedmont declined to discuss the Tesla arrangement, but hinted the automaker may not need supply by 2023.

“We’re confident in the relationship we have with our customer to be able to manage the supply of lithium when they need it,” said David Klanecky, Piedmont’s chief operating officer.

Tesla, which has other lithium suppliers, did not respond to requests for comment.

The North Carolina Department of Environmental Quality, which issues mining permits, said it expects an application “in the near future.”

State officials added their review process could stretch for more than a year as they solicit comments from at least six other state and federal agencies.

“I’m not even going to accept an application from Piedmont for rezoning until they have their state permit in hand,” said Brian Sciba, director of Gaston County’s planning and zoning office.

‘MINE AROUND MY PROPERTY’

Piedmont, whose stock trades in Australia and began trading on the Nasdaq in the United States earlier this year, owns or controls more than 3,000 acres (12 sq km) in the western corner of rural Gaston County.

While some landowners are prepared to sell if the offer is enticing enough, others say Piedmont has bullied them.

“They told me that if I don’t sell, they’ll just mine around my property,” said Emilie Nelson, whose 14 acres Piedmont has tried to buy since 2017.

Piedmont said it was unaware if one of its contractors made the alleged threat, but did not authorize or condone it.

“We always deal respectfully with folks,” said Patrick Brindle, Piedmont’s vice president of project management. “And if we weren’t those kind of operators, I don’t think we would be successful in entering into the number of agreements with landowners that we have.”

Piedmont, which recently bought stakes in Quebec and Ghana lithium projects, said it prefers to mine and process the metal at the Gaston County site.

Piedmont’s arrangement with Tesla has done little to impress locals. More than 1,500 have signed a petition asking officials to block the mine.

“There’s no doubt the mine would benefit our country and the green energy industry,” said Tracy Philbeck, a commissioner. “But it would have a negative impact on our community.”